History of The Bear Inn

The Bear Inn was opened around 1825, but there was an Inn and lodging at this junction in Perrotts Brook for centuries. Hares Antiques have moved our of the Old Bear and now it is private residence. The new owners are not offering bed and breakfast accomodation. Situated in between Cirencester and Cheltenham in the heart of the Cotwolds, Perrotts Brook is a very small village with lots of stories to tell. This page contains a brief history of what we know! 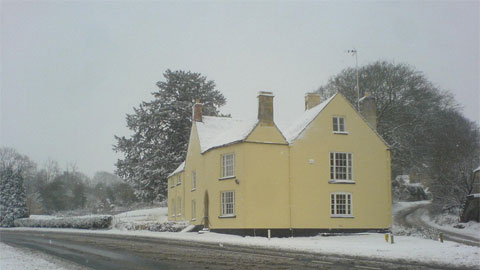 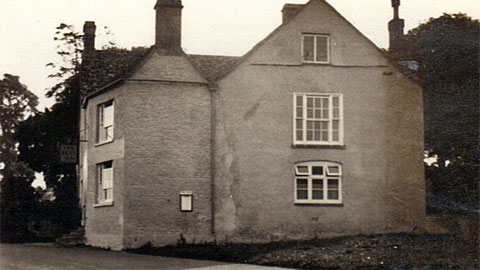 Since at least 1400 the Welch Way (now the Welsh Way) provided the main route from Wales and the Drovers brought their cattle and sheep through Perrotts Brook on their long march to London. Up to 2000 animals might be driven together and a local farmer had to watch out for Drovers putting their animals in a field overnight and eating it bare. One Rector let his pasture at 4d per head per night and in 1767 netted £5.17s 0d.

In the 18th century wagons became commonplace on the Welsh Way taking cheese and cloth from the Midlands and Welsh Borders to London via Lechlade. In peacetime much of this trade might go round the coast from Gloucester or Bristol, but in wartime it was safer to take it by the Welsh Way. At Lechlade the goods were loaded onto Thames barges.

In the 18th century there were probably two inns in Perrotts Brook. The Old Inn stood in what was the Bear Inn carpark and the stables were in the cottage which had the steps to the hayloft near the road on the gable end.

In 1750 William Ody advertised his "Huntsmen and Hounds" across the road in the house now called "Beechwood". The advertisement stated that the premises was "compleatly fitted up and accomodated for the Entertainment of Gentlemen and Travellers: There is a Dog-Kennel neatly compleated and a Pack of Hounds kept to pleasure any Gentlemen that like the Diversion of Hunting".

When the new Toll Road from Cheltenham to Cirencester opened in 1825 the farmstead we know as the Old Bear became a full time hostelry to serve the increase in business from the smarter "carriage trade".

It is thought that the name Perrotts Brook and The Bear may be derived from Saxon words, "bearu" meaning wood, corrupted to "Bear Bridge", or possible "Barrow Bridge", a reference to the ancient burials nearby.

More dramatically one historian believed that it comes from Bier Bridge, or Bearer's Bridge. The story goes that in the 13th century the village of Bisley was under an interdict, a punishment that stopped the Church there administering the last rites. Bodies were therefore carried along Welch Way for Christian burial at Bibury or Barnsley. The pall bearers stopped overnight at The Bear because the deep cellar is cold in both winter and summer because a brook runs underneath the floor. The bearers could leave the corpses below while they enjoyed more convival company upstairs. The cellar with its very old vaulted brick ceiling still has the brook running underneath, which can be seen in the corner of the room. If you are staying at the bed and breakfast ask the staff of Hares Antiques to show you down to the old cellar. It is surprisingly cold, but the chill you feel is something more.

Even before The Bear became formally an Inn it had been a farmstead serving travellers for hundreds of years. The stable on the roadside and the pigsty give clues to life here. Travellers horses could be changed or rested and many of the landlords were carpenters or wheel wrights who could undertake repairs. The Inn had 40 acres at one time and kept chickens, pigs and probably a house cow or two as well as horses to pull wagons and for riding. There is a well under the floor of what later became the restaurant, as that area used to be a courtyard. 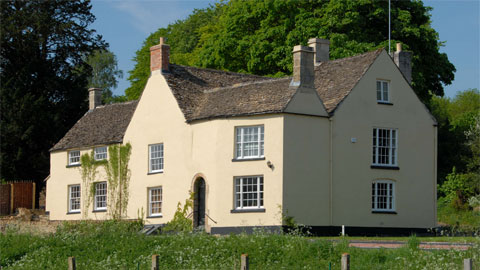 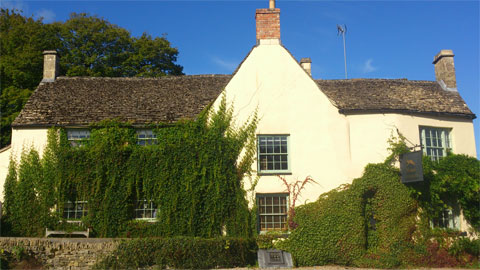 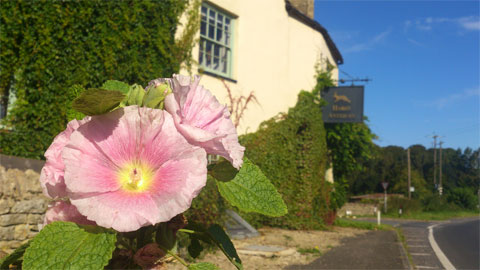 Now a private residence and no longer a bed and breakfast, The Bear has been serving travellers for generations in this hamlet of Perrotts Brook in the Cotswolds near Cirencester. For more than a thousand years this crossing point of the River Churn has carried the ancient Welsh Way and close by is the junction with the Whiteway and Rapsgate which were the vital routes for salt from Droitwich to Cirencester.

Down the Welsh Way British tribes, Roman invaders, Welsh drovers, wagons and coaches followed in succession over the centuries. There has been a bridge over the river Churn at this point for at least since the 12th century, but long before the Roman invasion this valley was an important centre for the ancient British Dobunii tribe, most probably centred in the valley towards and in the village of Bagendon.

Just above the Bear in the Whirlestone field is a Barrow, probably the burial place of an important Chief or King. This is one of a line of Barrows that is equally distanced from each other at Duntisbourne Rous, Edgeworth and Bisley, which point to the Severn crossing point at Framilode.

In the 1950s extensive excavation of earthworks near the Inn by Elsie M Clifford revealed iron anvil coin dies, showing that there was a mint here. Across the lane from the inn is an entrenchment, a defence probably against the Roman invaders, which includes a parade ground, arms stores and cook houses.

There once was probably a long barrow in Bagendon in the field called Whirlestone field. A victorian history of the village says that it was probably destoyed in 1792 with enclosure when extensive walling took place. "Similar narrow thingstones, very well matched and evenly bedded" were used in the wall - like the ones at Belas Knapp barrow. Within quarter of a mile were ten massive slabs serving as styles, possibly the slabs from the barrow.

"Recent excavations (prior to 1960) have established that the area protected by the Bagendon earthworks (200 acres) was the tribal capital of the Dobunni, after they had come under the control of the powerful Belgic Catuvellauni from Essex and Herts about 15 AD. A mint was established at Bagendon.

The area was well provided with water and the natural protection of forests and surrounding hill-slopes. Along the north side the bank of Scrubditch still stands nearly 10 foot high, its ditch faces south, also a bank and ditch along the east side., traces of other banks along this side but levelled by cultivation. Banks were also traceable (1960s) to the south side following the road called the Welsh Way, though the ditch is silted up the bank is still clear and is/was a field boundary.

The Romans established Cirencester as a main town/fort, so presumably Bagendon was deserted after the occupation."

Bagendon: a Belgic Oppidum: A record of the Excavations of 1954-56
by Elsie M Clifford

The History of Bagendon. Cheltenham
by George Rees

THE DUEL AT THE OLD BEAR

The story goes that Sir John Guise of Rendcomb repeatedly feuded with his neighbour, Sir Robert Atkyns of Sapperton. Sir Robert was well favoured by the Monarch, a Judge and a respected historian.

When these two met at the Bear for a gaming session an argument broke out as the evening wore on, superficially a dispute about cards, and friends of both men tried to pacify them. Sir John Guise demanded an apology in front of all present and on Sir Roberts refusal Sir John supposedly uttered the words, "Then draw and you shall die like a dog".

The pair drew swords and along with their supporters rapidly adjourned to the meadow across the lane (towards the garage) known as Colonel's Field. Sir Robert Atkyns was hoping to diffuse the situation by pricking Sir John Guise on the arm and threatening he would do worse, but Sir John would not hesitate and the swordplay commenced.

Sir John was run through by Sir Robert as the Rector of Bagendon wrote,
"The impetuous soldier spitted himself on the lawyer's blade, which came out his back, and he fell into a saw pit".

It was thought the wound was mortal, but Sir John Guise lived to fight another day - literally, as he was reported to have fought another duel with an officer in Gloucester not long afterwards, where he had taken Lord Lovelace a prisoner.

The first mention we have of Cirencester Races on Cerney Downs, just across the river Churn from the present Bed and Breakfast, is in 1712. The starting post was alongside the Whiteway. Racing is mentioned in the advertisement in the Gloucester Journal of 1750, for the "Huntsmen and Hounds" at Perrotts Brook, who sponsored the maiden race;

"At the said House will be given a good Hunting-Saddle, of Two Guineas Value, to be Run for, the Tuesday after Michaelmas Day, by any Horse, Mare or Gelding that never won at any one Time: a Whip for the 3d Horse: To start exactly at One o'Clock".

A new course was set in 1756 and a subscription was raised among the local nobility to sponsor the races on Cerney Downs. By 1800 it was being written that the subscription was discontinued after forty years in spite of the races being popular and few places had "better accomodation, and but few races grounds are firmer or more commodious".

Cirencester Races continued and in 1852 there were, according to the Wilts and Gloucestershire Standard, "a few thousand happy faces enjoying themselves". But there were said to be billboards placarded around Cirencester that year that urged "Racing Go Not!"

Perrotts Brook and The Bear must have been buzzing on race days, with sporting gentlemen and their ladies mingling with the local people and hawkers. The site of the grandstand gave its name to the Stand Plantation by the lane to the Calmsden.