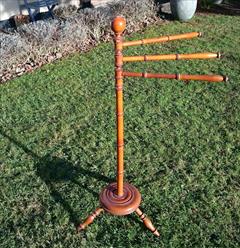 19th century Victorian period simulated bamboo antique towel rail. This charming and useful little towel rail stands of three turned legs and has three hanging arms, all of which rotate though 365 degrees. This one has the tripod base like a posser. Also known as a laundry posher, posser, dolly-legs, dolly-pegs, peggy, or washing maiden. They are usually possers in the UK, or plungers in the US, but can also be called dollies, ponches or possing-sticks. They were for agitating the cloth in a wash-tub, dolly-tub or possing-tub. This one stands on turned platform tripod base.This is a finely turned piece of work made of a good cut of close grained honey coloured timber which is probably beech wood.